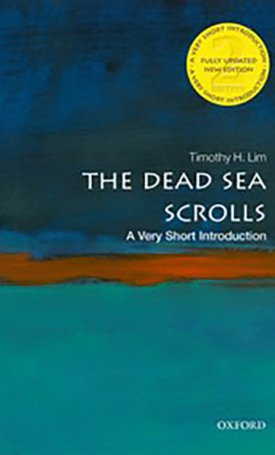 Since their discovery in 1947, the Dead Sea Scrolls have become an icon in popular culture that transcends their status as ancient Jewish manuscripts. Everyone has heard of the Scrolls, but amidst the conspiracies, the politics, and the sensational claims, it can be difficult to separate the myths from the reality.

In this Very Short introductions, Timothy Lim discusses the cultural significance of the finds, and the religious, political and legal controversies during the seventy years of study since the discovery. He also looks at the contribution the Scrolls have made to our understanding of the Old Testament or Hebrew Bible, and the origins of early Christianity. Exploring the most recent scholarly discussions on the archaeology of Khirbet Qumran, and the study of the biblical texts, the canon, and the history of the Second Temple Period, he considers what the scrolls reveal about sectarianism in early Judaism. Was the archaeological site of Qumran a centre of monastic life, a fortress, a villa, or a pottery factory? Why were some of their biblical texts so different from the ones that we read today? Did they have `a Bible`? Who were the Essenes and why did they think that humanity is to be divided between `the sons of light` and those in darkness? And, finally, do the Scrolls reflect the teachings of the earliest followers of Jesus?

Table of Contents:
1: The Dead Sea Scrolls as cultural icon
2: The archaeological site and caves
3: On scrolls and fragments
4: New light on the Hebrew Bible
5: The canon, authoritative scriptures, and the scrolls
6: Who owned the scrolls?
7: Literary compositions of the scrolls collections
8: Jewish sectarianism in the Second Temple Period
9: The communities of the Dead Sea Scrolls
10: The religious beliefs of the sectarian communities
11: The scrolls and early Christianity
12: The greatest manuscript discovery
References
Further Reading
Index