A Short History of German Philosophy 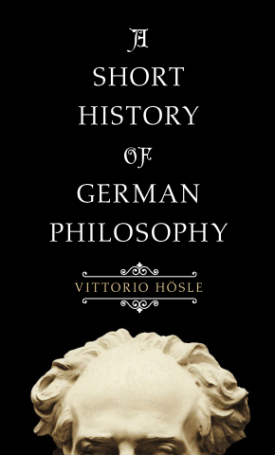 A Short History of German Philosophy

This concise but comprehensive book provides an original history of German-language philosophy from the Middle Ages to today. In an accessible narrative that explains complex ideas in clear language, Vittorio Hösle traces the evolution of German philosophy and describes its central influence on other aspects of German culture, including literature, politics, and science.

Starting with the medieval mystic Meister Eckhart, the book addresses the philosophical changes brought about by Luther`s Reformation, and then presents a detailed account of the classical age of German philosophy, including the work of Leibniz and Kant; the rise of a new form of humanities in Lessing, Hamann, Herder, and Schiller; the early Romantics; and the Idealists Fichte, Schelling, and Hegel. The following chapters investigate the collapse of the German synthesis in Schopenhauer, Feuerbach, Marx, and Nietzsche. Turning to the twentieth century, the book explores the rise of analytical philosophy in Frege and the Vienna and Berlin circles; the foundation of the historical sciences in Neo-Kantianism and Dilthey; Husserl’s phenomenology and its radical alteration by Heidegger; the Nazi philosophers Gehlen and Schmitt; and the main West German philosophers, including Gadamer, Jonas, and those of the two Frankfurt schools. Arguing that there was a distinctive German philosophical tradition from the mid-eighteenth century to the mid-twentieth century, the book closes by examining why that tradition largely ended in the decades after World War II.

A philosophical history remarkable for its scope, brevity, and lucidity, this is an invaluable book for students of philosophy and anyone interested in German intellectual and cultural history.

Vittorio Hösle is a German-American philosopher and the Paul Kimball Professor of Arts and Letters at the University of Notre Dame. He is the author of many books, including Morals and Politics, God as Reason, and The Philosophical Dialogue.