Habsburg Empire, The - A New History 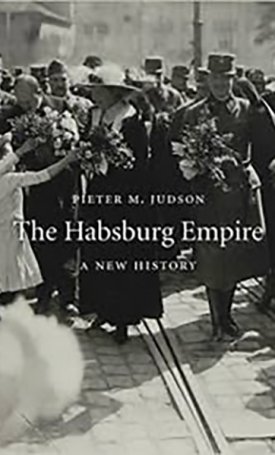 Habsburg Empire, The - A New History

In a panoramic and pioneering reappraisal, Pieter Judson shows why the Habsburg Empire mattered so much, for so long, to millions of Central Europeans. Across divides of language, religion, region, and history, ordinary women and men felt a common attachment to “their empire,” while bureaucrats, soldiers, politicians, and academics devised inventive solutions to the challenges of governing Europe’s second largest state. In the decades before and after its dissolution, some observers belittled the Habsburg Empire as a dysfunctional patchwork of hostile ethnic groups and an anachronistic imperial relic. Judson examines their motives and explains just how wrong these rearguard critics were.

Rejecting fragmented histories of nations in the making, this bold revision surveys the shared institutions that bridged difference and distance to bring stability and meaning to the far-flung empire. By supporting new schools, law courts, and railroads, along with scientific and artistic advances, the Habsburg monarchs sought to anchor their authority in the cultures and economies of Central Europe. A rising standard of living throughout the empire deepened the legitimacy of Habsburg rule, as citizens learned to use the empire’s administrative machinery to their local advantage. Nationalists developed distinctive ideas about cultural difference in the context of imperial institutions, yet all of them claimed the Habsburg state as their empire.

The empire’s creative solutions to governing its many lands and peoples—as well as the intractable problems it could not solve—left an enduring imprint on its successor states in Central Europe. Its lessons remain no less important today.


Table of Contents
Note on Names and Places
List of Maps and Illustrations*
Introduction
1. The Accidental Empire
2. Servants and Citizens, Empire and Fatherland, 1780–1815
3. An Empire of Contradictions, 1815–1848
4. Whose Empire? The Revolutions of 1848–1849
5. Mid-Century Modern: The Emergence of a Liberal Empire
6. Culture Wars and Wars for Culture
7. Everyday Empire, Our Empire, 1880–1914
8. War and Radical State-Building, 1914–1925
Epilogue: The New Empires
Notes
Acknowledgments
Index
* Maps and Illustrations
Maps
Habsburg Territories at the end of the War of the Austrian Succession, 1748
Habsburg Territories in 1772
The Austrian Empire in 1815 after the Congress of Vienna
The Austrian Empire, 1859–1867
Austria-Hungary in 1914
Austria-Hungary with wartime Polish and Balkan Zones of Occupation
East Central Europe in 1925
Illustrations
Remains of the Habsburg castle in Canton Aargau, Switzerland
Maria Theresa and her children in 1776
View of Trieste’s/Trst’s very busy harbor in the eighteenth century
Nineteenth-century depiction of Joseph II taking a turn at the plow in Slavíkovice Moravia
Maria Theresa’s son Grand Duke Leopold of Tuscany, later Emperor Leopold II, surrounded by his family in Florence
The Departure of the Militiaman (1813) by Johann Peter Krafft
Johann Peter Krafft’s depiction of the triumphant return of Emperor Franz I to Vienna
An Austrian steamship of the mid-nineteenth century arriving in Trieste/Trst
The railway bridge leading to Brünn/Brno, with the city in the distance
View of Troppau/Opava
The port of Zadar/Zara in Dalmatia, ca. 1845
Emperor Ferdinand on 15 March 1848, acclaimed by an enthusiastic Viennese crowd after his promise of a constitution
Nineteenth-century engraving depicting the Venetian uprising
Depiction of the first uncensored newspapers sold in the streets of Vienna in 1848
The Hungarian Parliament votes to create a military force to fight the invading army of Ban Joseph Jelaèiæ
Franti¹ek Palacḱy (1798–1876), noted historian of the Bohemian Lands and political leader of the Czech nationalist movement
Minister of Justice and of the Interior Alexander von Bach (1813–1893)
Photograph from an album commemorating the completion of the Südbahn railway line in 1857
Empress Elisabeth of Austria on horseback, one of her favorite activities
The imperial family in 1860
Ferenc Deák (1803–1876) in mid-life
Francis Joseph and Elisabeth after their coronation as King and Queen of Hungary
Cartoon in the satirical magazine Kikeriki, 9 January 1868
Count Casimir Badeni (1846–1909), former governor of Galicia and prime minister of Austria
The grand entrance to the Exhibition Palace with rotunda at the Vienna World’s Fair, 1873
Exhibition of agricultural products from Galicia at the Vienna World’s Fair, 1873
Postcard of the main building of the University in Czernowitz/Cernǎuți/Cernivci
View of the main railway station concourse in Lemberg/Lwów/Lviv, first opened in 1904
Railway bridge over the river Pruth near Jaremcze/Yaremche
Depiction of an election campaign speech in nineteenth-century Hungary
The Vienna Ringstrasse nears completion around 1890
Postcard from ca. 1905 of the city theater in Brünn/Brno
Postcard of the Croatian National theater in Zagreb
Postcard of the theater in Graz
Opening festivities of the millennium celebrations in Budapest, 1896
War loan propaganda poster advertising the fifth bond issue (November 1916) through the ®ivnotenská Bank in Prague
Evacuated population, Galicia, 1914
Women’s sewing class in the barracks of the refugee camp at Wagna, 1915
Newly crowned King Charles IV of Hungary, 1916
In the Jewish quarter of Lemberg/Lwów/Lviv during the pogrom of November 1918