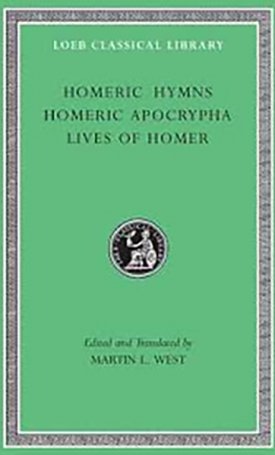 Performances of Greek epics customarily began with a hymn to a god or goddess—as Hesiod’s Theogony and Works and Days do. A collection of thirty-three such poems has come down to us from antiquity under the title “Hymns of Homer.” This new Loeb Classical Library volume contains, in addition to the Hymns, fragments of five comic poems that were connected with Homer’s name in or just after the Classical period (but are not today believed to be by the author of the Iliad and the Odyssey). Here too is a collection of ancient accounts of the poet’s life.

The Hymns range widely in length: two are over 500 lines long; several run only a half dozen lines. Among the longest are the hymn To Demeter, which tells the foundational story of the Eleusinian Mysteries; and To Hermes, distinctive in being amusing. The comic poems gathered as Homeric Apocrypha include Margites, the Battle of Frogs and Mice, and, for the first time in English, a fragment of a perhaps earlier poem of the same type called Battle of the Weasel and the Mice. The edition of Lives of Homer contains The Contest of Homer and Hesiod and nine other biographical accounts, translated into English for the first time.
Kiadó: Harvard University Press
Sorozat: Loeb Classical Library
Szerkesztő: West, Martin, L.
Kategória: Szépirodalom, Irodalomtudomány