Mutants and Mystics - Science Fiction, Superhero Comics, and the Paranormal 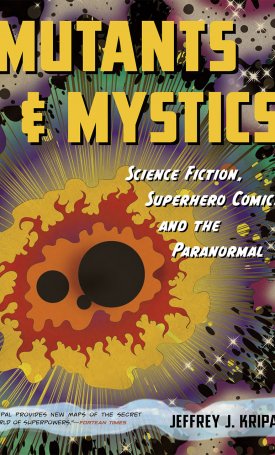 Mutants and Mystics - Science Fiction, Superhero Comics, and the Paranormal

In many ways, twentieth-century America was the land of superheroes and science fiction. From Superman and Batman to the Fantastic Four and the X-Men, these pop-culture juggernauts, with their "powers and abilities far beyond those of mortal men," thrilled readers and audiences—and simultaneously embodied a host of our dreams and fears about modern life and the onrushing future.

But that's just scratching the surface, says Jeffrey Kripal. In Mutants and Mystics, Kripal offers a brilliantly insightful account of how comic book heroes have helped their creators and fans alike explore and express a wealth of paranormal experiences ignored by mainstream science. Delving deeply into the work of major figures in the field—from Jack Kirby’s cosmic superhero sagas and Philip K. Dick’s futuristic head-trips to Alan Moore’s sex magic and Whitley Strieber’s communion with visitors—Kripal shows how creators turned to science fiction to convey the reality of the inexplicable and the paranormal they experienced in their lives. Expanded consciousness found its language in the metaphors of sci-fi—incredible powers, unprecedented mutations, time-loops and vast intergalactic intelligences—and the deeper influences of mythology and religion that these in turn drew from; the wildly creative work that followed caught the imaginations of millions. Moving deftly from Cold War science and Fredric Wertham's anticomics crusade to gnostic revelation and alien abduction, Kripal spins out a hidden history of American culture, rich with mythical themes and shot through with an awareness that there are other realities far beyond our everyday understanding.

A bravura performance, beautifully illustrated in full color throughout and brimming over with incredible personal stories, Mutants and Mystics is that rarest of things: a book that is guaranteed to broaden—and maybe even blow—your mind.

THE IMAGES: AUTHORING (AND DRAWING) THE IMPOSSIBLE
ACKNOWLEDGMENTS
LIST OF ABBREVIATIONS
ORIGINS

TOWARD A SOUL-SIZED STORY
NOTES
INDEX

Jeffrey J. Kripal is the J. Newton Rayzor Professor of Philosophy and Religious Thought at Rice University. He is the author of several books, including Esalen: America and the Religion of No Religion and The Serpent’s Gift:Gnostic Reflections on the Study of Religion.