The Oxford Handbook of Philosophy in Early Modern Europe 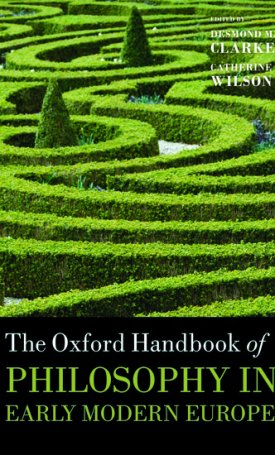 The Oxford Handbook of Philosophy in Early Modern Europe

In this Handbook twenty-six leading scholars survey the development of philosophy between the middle of the sixteenth century and the early eighteenth century. The five parts of the book cover metaphysics and natural philosophy; the mind, the passions, and aesthetics; epistemology, logic, mathematics, and language; ethics and political philosophy; and religion.

The period between the publication of Copernicus's De Revolutionibus and Berkeley's reflections on Newton and Locke saw one of the most fundamental changes in the history of our way of thinking about the universe. This radical transformation of worldview was partly a response to what we now call the Scientific Revolution; it was equally a reflection of political changes that were no less fundamental, which included the establishment of nation-states and some of the first attempts to formulate a theory of international rights and justice. Finally, the Reformation and its aftermath undermined the apparent unity of the Christian church in Europe and challenged both religious beliefs that had been accepted for centuries and the interpretation of the Bible on which they had been based.
The Handbook surveys a number of the most important developments in the philosophy of the period, as these are expounded both in texts that have since become very familiar and in other philosophical texts that are undeservedly less well-known. It also reaches beyond the philosophy to make evident the fluidity of the boundary with science, and to consider the impact on philosophy of historical and political events--explorations, revolutions and reforms, inventions and discoveries. Thus it not only offers a guide to the most important areas of recent research, but also offers some new questions for historians of philosophy to pursue and to have indicated areas that are ripe for further exploration.

Oxford Handbook of the History of Medicine, The

Oxford Handbook of Plato, The

Oxford Handbook of Skepticism, The

Oxford Handbook of Eschatology, The