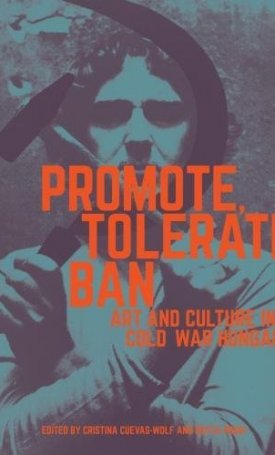 In the fall of 1956, Hungarians led a successful rebellion against Soviet control. However, after only ten days of freedom, the uprising was brutally crushed, and the Soviet-aligned minister János Kádár assumed power. Focusing on the Kádár era (1956–89), this publication explores the political reforms and artistic experimentations under the regime’s authoritarian cultural policy: promote, tolerate, ban. Artists who complied with ideological mandates were financed by the state; those who didn’t could exhibit, but they received no monetary support; other artists were forced into exile. Paintings, sculptures, photographs, posters, advertisements, mail art, and underground samizdat literature illustrate the diverse modern art forms and radical aesthetics created during this time. The book provides context for the vibrant debates behind the production of Cold War art and culture in Socialist Hungary and closes with the personal account of one of its main protagonists, the exiled Hungarian artist and critic Géza Perneczky.

Promote, Tolerate, Ban showcases art and cultural artifacts from the Getty Research Institute, the Wende Museum of the Cold War, and public and private archives in Budapest.

Cristina Cuevas-Wolf is the resident historian at the Wende Museum of the Cold War. Isotta Poggi is assistant curator of photographs at the Getty Research Institute, working on acquisitions and exhibitions of rare photographs with a focus on the documentation of cultural heritage, history, and archaeology.