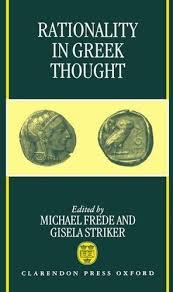 Conceptions of reason, rationality, and reasonableness have changed considerably over time, and scholars have all too easily projected contemporary ideas of reason onto ancient thought. This tendency has made it impossible for us fully to understand either the central tenets of ancient philosophers like Plato, Aristotle, and the Stoics, or empiricist tendencies in ancient thought.

Rationality in Greek Thought examines distinctive aspects of ancient conceptions of reason, sharpening awareness of the considerable conceptual change, and helping to remove a serious obstacle to a full understanding of ancient philosophical texts. At the same time, the essays stimulate a reassessment of our own ideas of reason and rationality, helping us set them in historical context and explore alternatives to them.