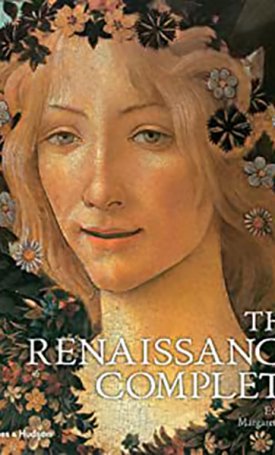 Previously published in hardback as `Panorama of the Renaissance`New in paperback, a lively, comprehensive and up-to-date overview of an enthralling era.

No period has been more discussed, dissected and argued over than the Renaissance, and every age has reconstructed it in its own image. Today’s emphasis is on its complexity – the way ideas, politics, religion, society, art and science depended upon and affected one another.

The Renaissance Complete does away with watertight divisions by means of a lucid, innovatory system of cross-references and brings the image to centre stage.

The fascinating range of topics covered includes the revival of classical learning, the printing press, the rise of the nation-state, philosophy and the role of women. The scope is all-embracing: Italy, France, Spain, Britain, Germany and the northern countries; courts and patrons, painters and sculptors, churchmen and traders, men, women and children.

Over 1,000 illustrations are carefully focused on over 100 key topics, subject-matter taking precedence over art history. An impressive information resource provides biographies, timelines, bibliography, a gazetteer of museums and galleries and an illustrated glossary.


Margaret Aston is widely recognized as a leading authority on European history of the 15th and 16th centuries, and has written extensively on the cultural and religious aspects of the period.