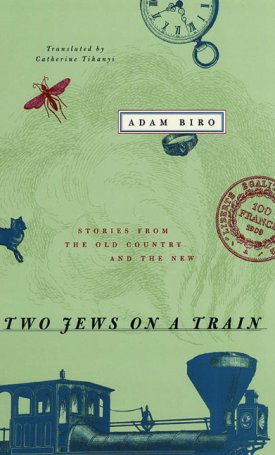 "Two Jews were traveling on a train. . . . " Many Eastern European jokes—and several of the charming and often hilarious conversations in this book—begin this way. From all regions of the world and from all walks of life, the characters are young and full of life and old and ugly; they are rabbis, matchmakers, students, and immigrants. They gossip and speak about everything from the banalities of the world to the unspeakable evils of existence all for a single purpose: to laugh and to celebrate the good luck of being alive.

As Biro recounts these tales, we hear not only his voice and the voice of his father, but those of generations of storytellers who have used humor to teach about the truly important issues in life—the delicacy of love, the fragility of friendship, the pitfalls of self-righteousness, the costs of narrow-mindedness, and the unpredictability of life itself. Biro artfully spins each story, lingering on the details, guiding the reader to the inevitable—yet always unexpected—punchline.

Taken individually, these stories will make you laugh out loud; taken as a whole, they form an invaluable record of the sensibilities of an entire people. Biro writes: "These Jewish stories of which not a single one happened to me, and of which I did not invent a single one, do describe me, do characterize me, do explain me. They are always my own story. And yours."

Adam Biro was born in Budapest in 1941, but came to Paris at the age of fifteen. He founded the publishing house Editions Biro in 1987 and is the author of nine books.